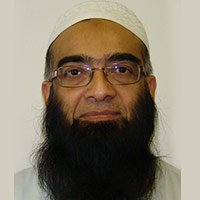 Shaykh Faizal Manjoo’s specialisation is in Shari’ah, Law and Islamic studies. He is also proficient in the areas of Takaful and Retakaful, Labour Law, Islamic Law of Inheritance, Family Law, Commercial Law and Law.

His first degree in Shari’ah Law and Islamic Studies is from University of Johannesburg, S.A, whereas his MA Degree is from Loughborough University, UK.

His broad-based knowledge Islam is founded on his Aalimiyyah Qualification from Madrasah Arabia Islamiyyah, S.A. He is an admitted at the Pretoria High Court, S.A. He is a member of the Supervisory Board of some Islamic financial institutions in Bahrain, South Africa and Mauritius. Apart from being a founding member of the Muslim Lawyers Association of South Africa, he also acts as the Lead Examiner for the Foundations of Islamic Finance & at ifs School of Finance, London and a consultant in Islamic Finance. he has written and presented numerous conference papers and has authored academic articles and books.