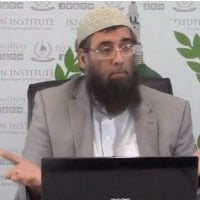 Shaykh Dr Rafāqat Rashid is a traditional Muslim scholar, General Practitioner, professional trainer and educator. He is the co-founder of al-Balagh Academy and Course Director of many of its courses such as its popular medical fiqh programme. He is one of the senior lecturers at JKN as the main teacher of Arabic Grammar known for his extraordinary way of teaching Arabic Grammar which attracts students from many different towns. He is a staff writer for Al-Mu’min Magazine known for his articles “Ask a Muslim Doctor” and “Living Islām in Modern Times”. An academic in the field of Islamic medical ethics and medical law having obtained his Masters from the University of Manchester on the subject of Muslim scholarly debates on the issue of Organ Transplantation, and also holding the title of honorary lecturer at the University of Leeds.

Shaykh Dr Rafaqat has been given ijaza from a number of Muslim scholars from the UK and abroad. He has been involved in training Ulema, students and the general public for a number of years. He has lectured and delivered courses on numerous topics related to medical fiqh including Islam, leadership, life skills, counselling, teacher training, advanced Islamic research techniques and health ethics and atheism. Specialising in Islamic Fiqh and ethics related to organ transplantation, immunisations, family planning and end of life decisions.

He spends a lot of his time leading and developing the advanced curricula in advanced studies and advanced Islamic research for the traditional Dars al-Nizami syllabus in the English medium for the up and coming traditional Muslim scholars of the future. More recently he has taken up the task of authoring books (in Arabic) on Ilm al-Balagha, Ulum al-Quran, Ulum al-Hadith, Usul al-Fiqh and researching Islamic bioethics.

Need Help? Chat with us
Start a Conversation
Hi! Click one of our member below to chat on WhatsApp
The team typically replies in a few minutes.
Al Balagh Helpline
Only for enrolled students
In Sha Allah, will be back soon
Admission Support
For Enrollment Related Queries